member exclusive: earn up to 2x the points! join now > 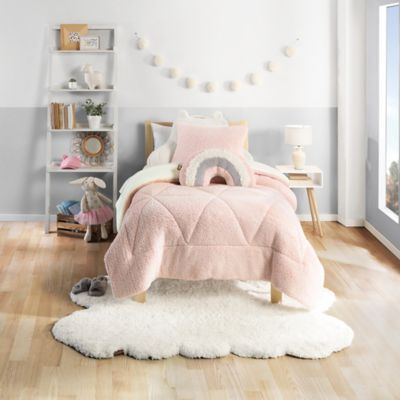 Bought this in Queen for my 8 year old daughters bed. It is a beautiful soft pink and so thick and soooo fluffy. She says it's like laying on a cloud, and she is 100% correct. It's hot humid summer here but we still lay on it to read because it's just ridiculously comfortable. This winter it's going to be amazing after a long day of teeth chattering and cold toes. I would buy this again in a heartbeat.

Terri.2 years ago
Not Recommended

I purchased three of these comforters. washed the first time in my large washer and dried on low - burned. Took the second one to a professional clear - burned....It is a one time no wash comforter....

Purchased a year ago. Unless using strictly as decoration I would not recommend this. It is comfy to lay on but picks up ALL lint and appears dirty quickly. Resorted to throwing it in the washing machine on cold and tumble dry low. It didn't ruin it, but did not get the lint out. You would have to pull out lint which takes forever. Smells but, still looks dirty.

This is an adorable plush pillow (pretty large for a throw pillow) for anyone, not just for a nursery. It's so soft and welcoming! I've actually shut my phone down and chilled with a book while resting with this pillow. Indulge! Get one for your quiet space and have no regrets!

I purchased the UGG Casey 3-piece King Comforter (Glacier Grey) in 2021.... after one year the comforter already needs to be replaced. At first it was sliding into a new UGG boot, so soft, cozy, amazing! Within 9-12months the shearling on the underside that touches your body became hard similar to the rough side of a kitchen sink sponge. I thought maybe washing it would fluff it back up but that didn't work. As for washing...my front loader (large drum) wasn't large enough to accommodate the king size comforter, I bring it to the laundromat each time :\ My daughter's UGG twin comforter (pink/white) is becoming hard as well and collects lint. Overall, I don't recommend it unless you plan on using it for a guest room that's rarely used.

This comforter is super soft and comfy! Love it!

This star pillow is nicer than I thought it would be. Soft and a good size for a throw pillow. The navy blue color doesn’t seem as vibrant as on the photo and that’s because the color is under the white sherpa. So nice though! Get it you’ll love it!

It is so pretty! My daughter loves this comforter! It cozy, soft and warm.☺️ Great quality!

Thick and cozy. Well made can wash in machine too. Love this comforter. I sleep with it without a top sheet and it’s heavenly.

Perfect accessory for my bed set

Why does this style not come for king bed?

I got this for my 2-year-old granddaughter fur Christmas and she loves it. She snuggles with it all the time.

I bought the pink one for my twin daughters and they absolutely love it. So me and my husband decided to get the same one in navy and now we understand why they loved it so much. It’s not super hot like a lot of comforters especially with it being Sherpa. It’s actually perfect. You don’t get too hot or too cold with it. The quality is also perfect as well. My husband thought I spend over $200 on this and was generally surprised at how much it actually was. Definitely recommend.

Love this pillow. I snuggle it every night. It also represents the Dallas Cowboy star and fits right with my decor.

Buy this! You won’t be disappointed. It’s a delicious experience sleeping with it. Great for cooler temps. I don’t use a cover or flat sheet because it feels so nice without.

Such a cute throw pillow and goes perfectly with my decorations in my dorm room! It’s also very comfy and is the perfect size.

THIS ITEM IS A BIRTHDAY GIFT ,I BOUGHT THE UGG WEIGHTED KIDS BLACKET AND THEY RAN OUT OF PILLOW SO I WAS GLAD TO SEE IT BACK

I bought this for my 5 year old granddaughter. She loves rainbows and loves sleeping on it when she spends the night. She says it is soft and cuddly.