Don't miss out! Get up to 60% off select clothing. shop all deals

introducing ever & ever, only at buybuy BABY shop now 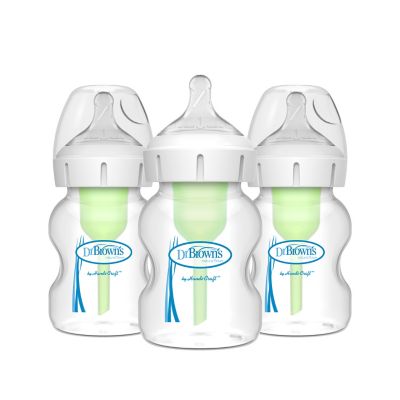 I'm so in love with the new "OPTION BOTTLES" because it solved my leaky problem I was having as you can see from the pic below, my grandson and I always got so wet with formula dripping all over us, and then I spoke with Diane a wonderful lady and she worked with me til we came up with a solution and we did when she told me about the new "OPTION BOTTLES" and immediately the bottles NEVER leaked 1 time, and my refrigerator doesn't look like this picture anymore. Thank you Diane for helping, and I'd recommend Dr. Browns "OPTION BOTTLES" to everyone, I LOVE THEM.

DisappointedMom.8 years ago
Not Recommended

I bought the Options Bottle about a month ago. At first, I thought it was great. It was the only nipple my son would latch onto. Now, every single bottle leaks! I've tried labeling the ones that don't leak and thought maybe the ventilation system and nipple only truly fit the bottle it original came with. But with trying all the different combinations to prevent leaks all my bottles still leak. It's just a big mess and I'm so dissapointed because I do not have any other options in terms of my son latching onto a different brand nipple. And I have read all the solutions to a leaky bottle on the Dr.Brown's website and none of them worked! I'm truly disappointed!

The absolute worst bottle I have ever used and I have 3 kids, so I have used quite a few. This one is by far the worst. During a nighttime feeding I wasn’t paying attention while my baby was eating and I look down and she is SOAKED in Breastmilk. Complete waste of money!

This bottle worked well for my son. We originally were feeding breastmilk and supplementing with formula due to him being under weight and a preemie. We eventually found out he has a cows milk protien allergy and we needed to switch to formula. After working with a spt and ot we decided to try this bottle for my little one. We had much better results with latching and sucking using the wide neck bottles. Only thing we wish is that these bottles offered a transitional nipple like the narrow ones have.

Between these and the avents. Helps her sensitive tummy. Minimal gas when switching to these. Also as a partially breast feed baby there is no nipple confusion

Baby took the bottles easily BUT….

Frustrated grossed out . 6 months ago

No issues with my baby taking the bottle. Went with these because every single doctor recommended them. I use them without the vent system. I first used the glass wide neck, then polypropylene wide neck because my carpal tunnel couldn’t handle the weight. However, I always have to be super careful about screwing the lids on super tightly so they don’t randomly leak. But the biggest negative issue was that almost half of the nipples become covered in a cloudy, slightly sticky and slimy film within a day of washing them — the outside, not the inside. Over half are clear but the rest are not. I always wash immediately, I always scrub with a brush, and sanitize them various ways (boiling & dishwasher) after rinsing, scrubbing with hot soapy water and the cloudy film STILL comes back. Using with breastmilk almost always, with a bottle of formula probably once every couple days but it doesn’t matter, either way it keeps on happening. At this point, I’ve thrown away 2 nipples so far and have 4 more just sitting on my counter (after washing/scrubbing/sanitizing multiple times to see and test how it’ll go away.. which it doesn't), which was fine at first because the set I bought came with so many, but now it’s a frustrating and gross issue. Why?! :(

I received this as a gift for my newborn and he was having trouble eating from these bottles. it seems they fed him to fast for his speed BUT I contacted customer service and they couldn’t have been more helpful. They truly care about their customers and their babies. They tried helping me troubleshoot which didn’t help my babies feeding issue so they are sending different bottles and nipples to try that should better suit my baby. This company is amazing and everyone should buy from them because they really care and go above and beyond to help you be successful with bottle feeding!

My daughter had reflux problem and tried several different brands but this is the only one that works best.

My baby loves it

I’m currently using these bottles for my baby .. I tried many but my baby likes Dr.Browns

We’ve used Dr Brown’s through 2 kids. The old bottles would leak from time to time but the newest version has not leaked once. We tried a wide range of bottle and Dr Brown’s stands out among the rest. Highly recommend over other brands.

This bottle is amazing the system helps a lot to my baby gas problems and she accepted the bottle pretty well. The system do works, we change from other brands and we are in love with this ones . No more than thanks to the creators of this bottles that just make my baby smile. Thank you Dr Brown

I receive this from Dr brown because I had a problem with one of my bottles and they replace them and make me try this, which I ABSOLUTELY ADORE, I am half breastfeeding and half formula, my baby is 4.5months and now she realizes more that bottle and breast are not the same , I was having a bit of troubles with her making her eat as always but with this big nipple bottle the problems went away . She adores it and is accepting me the formula again, Thank you Dr Brown because I search you for a problem , you solve it and make me feel in love with this new big nipple bottle

These Dr. Brown's bottles are the best bottles I have ever used. I had an issue with one out of 5 I bought and they were very quick to assist me in fixing the issue. The nipple from the Options wide neck bottle we got has a split in it so it kept leaking formula everywhere. We were all confused how it was happening until I went to clean the nipple a second time and felt my finger literally go through it. I usually use a bottle brush so I didn't notice the first time. It was a pretty big split too but when he wasn't using the nipple it looked fine. They sent us a brand new nipple quickly and his new bottle is now perfect. We used a different brand bottle with him and could immediately tell a huge difference in the amount of gas he produced. His burps were bigger and he fussed a lot more because all that gas made him very uncomfortable. We went back to Dr. Brown's bottles and instantly could see the difference. He still has to be burped but they are way less violent and painful for him. It's just expected for a baby to get gassy but why make them get it worse than they need to? I recommend these bottles to every mother I know!! I want to make sure to spread the word about anything that helps make babies more comfortable and happy and for feeding this bottle is the best. I will never use another brand again. No I do not work for Dr. Brown's and this was not a sponsored review. I just really feel this is the best bottle for a healthier happier baby.

My son came home from the hospital so colicky. I tried everything!! I went to the store desperately looking for anything and grabbed these. They helped him so much burping became so easy and he stopped having as much gas pain. They aren't terrible to clean and they don't leak! I am one happy mama

They leak, just so frustrating. I tried erything to stop it, northing works.

Great, then not great

I bought 8 4oz and 8 8oz vented bottles and initially loved them. Baby took to them well and colic was minimal however at about the 3 month mark almost all the bottles started leaking from the rim. I did everything they mentioned that could be the problem. Tightened them, loosened them, didn’t heat them, took the venting system out when heating etc. nothing worked. Every bottle is now leaking and I am doing nothing different than I did for the past 3 months. I can only assume they don’t last, which is a bummer since a spent a pretty penny and now have to buy all new bottles not to mention the amount of breast milk I’ve lost. So disappointed.

My newborn baby has tried to many different bottles and we always seem to come back to this one! Dr browns bottles are amazing with my baby latching on perfectly. Only issue is they leak all over her and me.

I got a variety of bottles!

These were gifted to me and really hold up well! They’re durable and I’ve found customer service to be extremely kind and helpful as well!

Super easy to use and clean! Very durable. The only bottles both my sons use

I was breastfeeding/pumping and introduced a bottle early on due to latch issues. Our family doctor recommended these bottles as our baby is very spitty and on the verge of a reflux diagnosis. He was also gassy at times. So when we changed to this wide neck bottle, it was truly a game changer! Definitely recommend.

iv used the brand 8 years ago it was fine now this time around things have changed, the bottle leaks leaks leaks, so dissapointed and frustrated.