save 20% off your next order! get offer

introducing ever & ever, only at buybuy BABY shop now 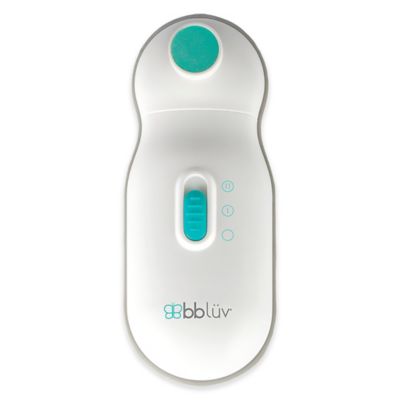 I have used clippers on my babies for years. With my seventh baby I went ahead and bought these as my eyes are not as good as they once were. I wish I had this for all of my kids. Just a few seconds and all the nails are done with no worries of accidentally clipping them. I just wish it was easier to find the replacement discs.

Not working as expected

I am unsure if this is a flaw or the product or not but I have had more success with an Emory board. The rotating discs isn’t generating the desired results with my twins. A few snags here and there (nothing painful) . I think this may perform better as they twins grow and their nails are stronger.

I was terrified of having to trim my newborn’s teeny tiny nails! I’ve had many fur babies who all hated getting their nails cut/filed and it needed to be done so carefully to avoid getting down to the quick that it’s left me with some PTSD. I was even scared to try this trimmer but I really didn’t have to be! My baby was totally chill the entire time for all 10 fingers and toes! I’m thankful I don’t have to subject her to permanent mitten wearing lol.

I took forever deciding on a nail trimmer/file for our new baby and finally chose this one based on the size. Other options were so large for such a little baby! I'm so happy with my choice. Not only does this trimmer fit perfectly in my hand, but the carrying case keeps everything together and neat. I love the smaller size (takes up less space in the many drawers of baby items) and feel confident it will do its job.

Love the concept, but the discs dull quickly and I stopped using this once baby was 2 or 3 months old with bigger nails. I use a cuticle trimmer to cut her nails instead- works so much better. I felt like this kind of just bent the nail down instead of actually making it shorter, if that makes sense. Stopped some super jagged nails from immediate scratching, but a couple days later they seemed as though they had never been trimmed.

I am a first time mom & terrified of doing anything that would hurt my little one. Even the thought of cutting his nails worried me. Using this trimmer is such a gentle, nearly foolproof way to make sure his nails aren’t sharp & he doesn’t scratch himself.

Cute and chic! Easy to use and don’t have to be scared about hurting baby

this product is very easy to use and its an awesome product. very happy.

Gets the work done

It’s an efficient tool Only drawback is that sometimes the edges are not too smooth when trimmed so when they grow back they are really sharp.

Our kiddo ended up with a few nicks, some blood and a lot of tears when we cut his nails with a regular baby nail cutter. After two or three times of this we needed to find a better solution and this is it. Super easy on the baby's nails, he does not fuss at all with the electric emory board and this takes the sharp edges of his nails.

I’m so glad I found this electric nail filer. It’s expensive but worth the money. I’ll always recommend this product to friends and family with babies!

Buy it!!!! So worth it. Makes cutting nails so easy

The first time I clipped my babies nails I accidentally punched her skin and didn’t want to clip them again. I purchased the BB Luv electric nail file and do not regret it. I’ve been using it for over a month. My baby doesn’t mind it at all and it actually works! Definitely worth the purchase!

Works great and easy to use

I was nervous to use a nail clipper on my babies tiny fingers so this is a great alternative.

I bought this after accidentally cutting my daughter's finger while trimmer her nails. This trimmer works great and gives me peace of mind. It is very gentle on her fingers and she doesn't mind when I use it.

Love this product, easy to use and gentle on baby.

After hurting my grandson while cutting his nails, I was eager to find something else to bring me peace of mind. This was my saving grace. He relaxes as if in a nail spa while I buff his nails. Happy grandma.