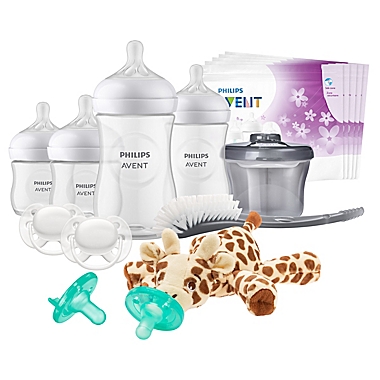 Hide
This Philips Avent Natural Essentials Gift Set is perfect for any parents-to-be. This gift set comes with Natural bottles which have the Natural Response nipple that lets baby control the pace of the milk like they do when breastfeeding.

Please be aware we've temporarily extended our delivery time frames due to Covid 19 precautions at our facilities. The extended time frames will be reflected in the estimated delivery date shown at checkout.

Free Standard Shipping on Orders Over $39

Free Standard Shipping with any online purchase of $39 (merchandise subtotal excludes store pick up items; merchandise subtotal is calculated before sales tax, before gift wrap charges, and after any discounts or coupons). Truck delivery and shipping surcharges on over-sized or extremely heavy items will still apply (these charges are indicated on the appropriate product information pages and will be displayed in the shipping subtotal of your order). Orders typically arrive within 3-6 business days. Items shipped directly from the vendor or to Alaska and Hawaii have longer delivery lead times. This offer does not apply to Alaska, Hawaii, Puerto Rico or Business Direct orders.

The card is not active. Please enter another card or provide another form of payment for the balance.

Insert your gift card number and 8 digit pin number available from either your plastic or eGift Card.

You're all set. We'll let you know when your item is back!

An email will be sent to the address provided when item is in-stock. Unfortunately we cannot guarantee or reserve the stock of an item, so check back with us as soon as you can to place your order.

Notify me when this item is in stock

Please enter your name and email address. You will be notified when this item is in stock.